The Santoku knife is probably one of the most famous Japanese knives, but what is its success due to? This knife is famous for best embodying the best Japanese tradition in the kitchen. If you are a fan, don't miss the opportunity to compare all our best Santoku knives.

Santoku knife what is it for?

The Santoku knife is probably one of the most famous Japanese knives ever made. Its spread is such that today there are many brands of kitchen knives, including non-Japanese ones, that make their own Santoku. But why is this knife so popular? What are the aspects that have contributed to making him famous? Santoku is known in the East as the knife of the three virtues. This is because its shapes and its type of blade make it the ideal tool for cutting meat, fish or vegetables. The secret of Santoku is therefore versatility!

Why buy the Santoku knife?

Of the Japanese knives, Santoku is undoubtedly the most versatile. In fact, as mentioned in the previous paragraph, this knife was created to be the ideal tool for cutting meat, fish or vegetables. its shape is the result of a careful study carried out by the most ancient Japanese artisans, who tried giving life to this shape, to create the perfect knife.

The perfect kitchen knife, in Japanese culture, oriented towards minimalism, is that knife with the ideal shape to carry out all kinds of cutting activities. Hence the name Santoku which means knife of the three virtues.

Although the Santoku was originally marketed only in the East, for several years, given the success of the Japanese shapes also in the West, the Santoku knife has become one of the most popular knives all over the world. Its diffusion is such that we can argue without doubt that its shape is one of the best known and most recognizable in the world.

Even those who have never entered a kitchen could at a glance recognize the characteristic shape of this knife among many. The same obviously does not apply to exceptionally famous Japanese knives, but not like this tool. An example in this sense is the Nakiri knife or the Deba knife, today certainly more widespread also in Western kitchens, but certainly less famous than the knife of the three virtues.

To make the best use of the Santoku knife, no special precautions are necessary. This Japanese knife is in fact designed to be extremely versatile and easy to use. The shape of its blade, as mentioned several times, is ideal for cutting any type of food. Not too fine like the blade of the Nikiri knife, nor too thick like the blade of the Deba knife.

The size of the blade also makes this knife easy to use. Generally no longer than 14/15 cm. It offers the user of the knife the possibility to handle the blade with care and effortlessly even at speed, always offering a perfect cut.

If you are looking for a professional Santoku knife, then you have to search among traditional Japanese knife manufacturers. As we have mentioned in the previous paragraphs, in fact, this knife is now also made by many Western companies. In making this knife, however, Western companies tend to eliminate those typical characteristics present in a Japanese knife.

This is why many Japanese-shaped knives are either not sharpened on both sides or have the finger guard edge at the bottom of the blade. If you are looking for a professional tool then it is important to pay attention to the manufacturer and the place of origin.

The shape of the Santoku knife is Japanese and finds its origins in the first creations produced by Asian masters. The shape of this knife is for many the one that comes closest to the shape of the "perfect knife". In fact, in the Asian world the most important forging masters have experimented with different shapes for years, in an attempt to create the perfect knife for any type of cut.

Hence the name of this knife which precisely means knife of the three virtues. As it is ideal for cutting meat, fish but also vegetables.

Unfortunately it is not possible to identify the best Santoku knife here. The shape of this Japanese knife makes this blade one of the most widespread and also used in the West, but precisely for this reason, there are many specialized brands that in an attempt to differentiate themselves have created different products. If you are looking for the best santoku, however, we can offer you some guidelines to take into consideration. The first is certainly the origin of the knife. Today many European brands make Japanese-shaped knives for this reason it is advisable to look first of all at the origin of the knife and the materials.

The choice of the steel used. The best Japanese knives are often made of AUS 10 steel or CTS BD1N. The handle of the blade can be made of wood in the traditional versions or in G10 in the more modern versions.

Are you looking for a damask Santoku knife? If you are looking for this kitchen knife made of damascus steel, then you are in the right place! On KnifePark.com you will find many different types of knives made of damask steel. Here you will find the Samura 67 damascus and Samura Damascus lines, but also the knives of the F. Dick brand!

Why buy a knife with a honeycomb blade? What are the benefits? Although many may think that the hollowing of a blade in a kitchen knife has only an aesthetic role, in reality this is not the case at all. Kitchen knives made with a honeycomb blade are considered ideal for cutting fish or other foods that tend to stick to the blade.

The alveoli present in the blade in fact allow the food not to adhere perfectly to the blade, allowing the air to act as a cushion in order to prevent a suction effect of the food on the blade.

Also remember that all our Santoku knives have been subjected to TEST by the manufacturers. All our products are made by reliable brands that over time have become famous for their creations and for the reliability of their blades.

In this short article dedicated to the Santoku knife, we have had the opportunity to observe some of the main aspects that have contributed to making this Japanese knife so famous. In fact, we talked about the history of its shape, explaining what was the thought that led to the creation of this blade. Finally, we then observed how the shape of the Santoku is today one of the best known and most widespread in the world, since anyone, even a child today, is able to recognize the shape of this kitchen knife among many. 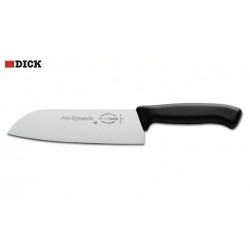 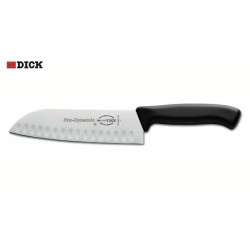 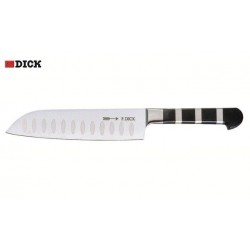 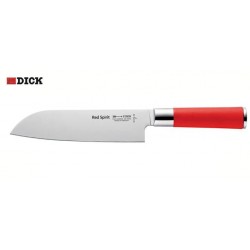 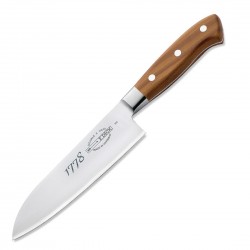 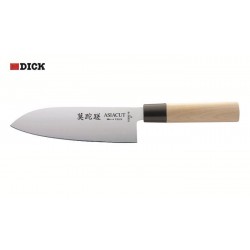 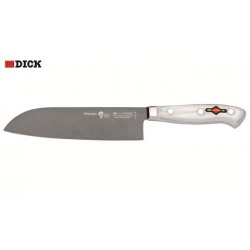 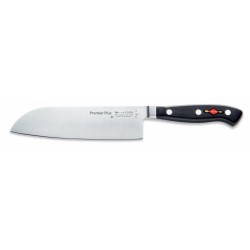 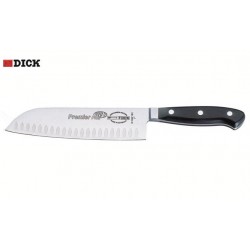 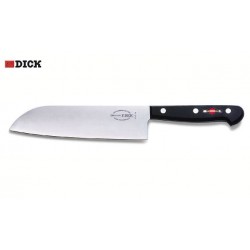 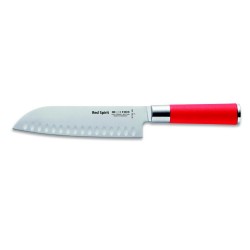